-The signing ceremony of strategic partnership between representative blockchain rewards platform, MiL.k and airasia rewards, the loyalty program of the airasia Super App was held in Kuala Lumpur.

-MiL.k is a representative lifestyle blockchain service provider which integrates rewards points and connects top services of each sector such as Yanolja (No.1 OTA), CU (No.1 convenience store), etc.

-In 2022, MiL.k surpassed over 1.1 million users in South Korea, and it aims to expand its strategic partnerships globally to provide cross-border services.

– Through the partnership, airasia Super App with 51 million users across Asia is participating in the MiL.k Alliance. Two companies will collaborate on point integration and co-marketing activities to provide benefits to global users

SEOUL, South Korea, Sept. 20, 2022 /PRNewswire/ — Milk Partners (CEO Jayden Jo), which operates the blockchain-based loyalty platform “MiL.k,” announced on the 20th that the company has signed a contract focused on point integration with BIGLIFE, which operates and manages the airasia rewards program. 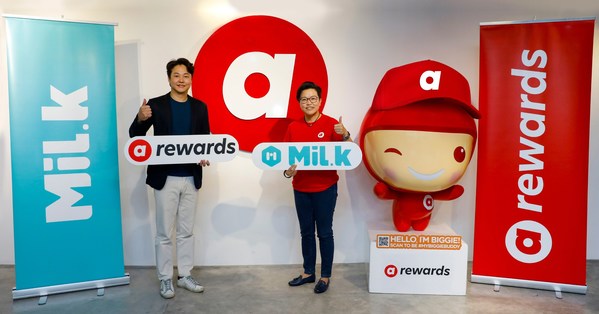 The signing ceremony was attended by Jayden Jo, Chief Executive Officer of Milk Partners, which operates MiL.k service to 1.1 million users in South Korea, and Ong Wai Fong, Chief Loyalty Officer of airasia rewards under the airasia Super App, which has over 51 million users across Asia.

Through this partnership, the two companies plan to integrate the airasia rewards programme with MiL.k platform and its token, Milk Coin (MLK). With the integration, airasia Super App’s loyalty points, also known as airasia points will be connected with MiL.k’s point ecosystem, and various co-marketing activities will be held targeting global users of airasia and MiL.k. It will be a huge step for MiL.k to connect its 1.1 million users that are primarily from Korea to Asia’s fastest growing travel & lifestyle super app platform & ecosystem. Furthermore, the partnership will be the first use case of airasia Super App to join a blockchain ecosystem, which is closely connected to users’ daily lives.

Airasia points from airasia rewards, the airasia Super App’s customer reward benefit, is used to purchase various services and products on the platform. In addition, it is possible to use the points of global companies that are affiliated with airasia by exchanging them for airasia points through the ‘airasia xchange’ service in the app. Airasia members can use airasia points to pay for travel products such as flights and hotel stays, and non-travel products such as food delivery, ride-hailing, duty-free shopping, and lifestyle deals, all on the airasia Super App. A wide range of services are also available via the Super App such as financial services, insurance, courier services, on-demand professional learning courses and others.

Airasia rewards CLO, Ong Wai Fong said, “MiL.k is one of the most successful examples of global blockchain projects” and “We plan to work closely together to raise awareness of the airasia Super App in the global blockchain industry. and provide a more satisfying point experience and benefits to customers of both companies.”

Milk Partners CEO Jayden Jo said, “The partnership with airasia Super App is one of our remarkable accomplishments of global expansion. Starting with this partnership, we will continuously enlarge the ecosystem of MiL.k in the global market. Southeast Asia will be the starting point, and our vision is to become the first cross-border platform on blockchain.”

“MiL.k,” a blockchain-based point integration platform operated by Milk Partners, is a service that allows users to exchange and integrate points from various partners through the digital asset “Milk Coin (MLK).” In less than 2 and a half years since the service started in April 2020, it has shown rapid growth by forming partnerships with various companies representing their sectors and earned over 1.1 million users.

MiL.k has been making partnerships with top services in Korea such as “Yanolja” the No.1 OTA service, “CU” the top convenience store brand operated by BGF Retail, “INTERPARK” the leading e-commerce platform, “Shinsegae Duty Free” the duty-free branch of retail giant Shinsegae group, “Megabox” one of the top movie theater franchises, “Jin Air”, the LCC branch of Korean Air, etc.

As a prime example of a blockchain-based service, MiL.k is expected to grow its ecosystem by enlarging its strategic partnerships in SEA this year.

Each week, Greenhouse Grower highlights a video that shines a spotlight on the controlled-environment industry, from crop protection advice to insider views on...

Digital assets and blockchain technology have gained significant attention in recent years, and with good reason. These innovations have the...

The National Institution for Transforming India (NITI) Aayog has announced the launch of a new learning module for citizens looking to pivot...

How Altcoiners Use Bitcoin To Rent Seek - Bitcoin Magazine