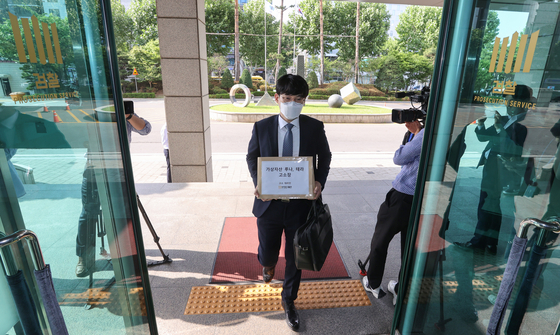 An attorney enters the Seoul Southern District Prosecutors Office to file a complaint against Terraform Labs co-founder Do kwon on behalf of clients in June. [YONHAP]


Prosecutors are reviewing whether to categorize Terra coins as securities, according to local media reports on Tuesday.

If the coins are determined to be securities, the investigation into the crash of Luna and TerraUSD could begin to involve possible violations of capital market laws. This could include unfair trading and price manipulation.

So far, the investigation is focused on the possibility of fraud.

The value of TerraUSD and Luna, which operated together to maintain the TerraUSD pegged to the dollar, collapsed in May, wiping out an estimated $40 billion in value and destabilizing the crypto markets and the financial markets in general.

A class action lawsuit was filed in Korea by investors against the Terraform Labs, which developed the coins, Do Kwon and Daniel Shin, the masterminds behind the coins, claiming fraud and other wrongdoing.

Prosecutors raided seven crypto exchanges and other locations, including Shin’s residence, in connection with the Terraform Labs investigation in July. Kwon hired an attorney as the prosecution continues its investigation into the coins.

The prosecution is gathering opinions from financial regulators and experts in virtual assets, according to the reports, including one from Yonhap.

“Coins are defined as assets in the Act on Reporting and Using Specified Financial Transaction Information,” argues Park Po-jun, an attorney at the Kisung law. “It will be difficult for the prosecution to revise the definition.”

“There is a chance that domestic financial authorities may expand the definition of security tokens,” notes Park Sung-jun, CEO of Andus. “In that case, the domestic crypto market will wither considerably.”

The U.S. Securities Exchange Commission (SEC) is investigating whether Terraform Labs and Kwon were involved in selling unregistered securities.

In the United States, the Howey Test is used to determine whether a coin is a security, and some coins, notably Bitcoin, have been found not be to securities, while others have been found to have the characteristics and qualities to meet the test an be considered securities that must follow the relevant laws.

Content warning: This post includes a description of the death of a child. Tragically, Chicagoland traffic violence has taken the...

MKR holders that aped in towards the end of September are pleased with their decision considering the healthy run-up in...

US regulators warns of crypto threatening financial stability, where does India stand on it?

What makes cryptocurrencies so appealing is their decentralized nature. | Image by WorldSpectrum from PixabayEver since the Bitcoin was launched...

How crypto has evolved to abandon its ethos of decentralisation

Disclaimer: Opinions expressed below belong solely to the author. More than a decade ago, Satoshi Nakamoto released the initial Bitcoin...

What Is Tether? - The Defiant

3 Facts About Ethereum That You Should Know