How Many Luna Coins are There?


By now, most of us are pretty familiar with the LUNA cryptocurrency. Its first version – now renamed LUNC – lost over 90% of its value in the TerraUSD (UST) crypto crash earlier in 2022.

In an attempt to help the token resurface, co-founder Do Kwon relaunched LUNA 2.0 in late May with the creation of a new LUNA coin. Meanwhile, the TerraUSD stablecoin was renamed Terra Classis USD (USTC) and the old LUNA token became LUNA Classic (LUNC). For the purpose of clarity, we’ll be using the current names of LUNA (the new luna coin) and LUNC (the old luna coin) throughout this article.

Before we analyse how many LUNA coins (LUNA2) there are and who owns the LUNA coins in circulation, it is important to note that LUNA is a new cryptocurrency, therefore any ownership data available online is limited.

LUNC (previously LUNA) was the native staking coin of the Terra protocol. It was created by South Korea’s Terraform Labs in 2018.

Terra is an open-source blockchain hosting a number of decentralised applications (dApps) and developer tools. It uses a Proof-of-Stake (PoS) consensus mechanism and, according to its whitepaper, “is one of the fastest chains in existence, giving users an unparalleled DeFi experience.”

The original Terra blockchain focused on creating stablecoins – cryptocurrencies backed by reserve assets such as fiat currencies, a commodity price or algorithms that aim to maintain a 1:1 peg with the currency they back,  like the TerraUSD (UST) stablecoin.

The platform had a dual-token system that used UST and LUNC to create and stabilise UST. LUNC was also used for governance and mining. UST coins were minted by burning LUNC tokens.

LUNC  launched in 2019 and was one of the most successful decentralised finance (DeFi) tokens, becoming the seventh-largest cryptocurrency ranked by CoinMarketCap by market capitalisation, however, since its  recent crash, the token has fallen to the 227th place.

However, days after the crash, reports started coming out speculating that the cryptocurrency crashed as investors decided to purchase a large sum of BTC to buy UST, with the intention of profiting once the value of UST fell.

Others believed that the cryptocurrency lost its value due to its high dependency on the Anchor Protocol, a UST savings account which paid an unsustainable 20% interest rate and made the asset a very popular investment.

In response to the massive LUNC and UST freefall, Do proposed a revival plan, which saw a hard fork from the failed token and the creation of Terra 2.0 and the new LUNA token. Old LUNA tokens were renamed LUNA Classic (LUNC) and UST became USTC – TerraClassicUSD.

New LUNA tokens were airdropped to existing holders of LUNC and UST. According to the project’s migration document, LUNA is the main staking asset of the new Terra chain which doesn’t contain any stablecoins.

Since LUNA relaunched, the token has been on a downward spiral, falling by 83.3% from $14.19 on 28 May to $2.3705 on 9 June as analysts continued to remain sceptical about the cryptocurrency, especially since it now has to compete with other Layer 1 tokens such as Ethereum (ETH), Solana (SOL) and Cardano (ADA). Previously LUNA was a Layer 1 token, but also had stablecoin characteristics. 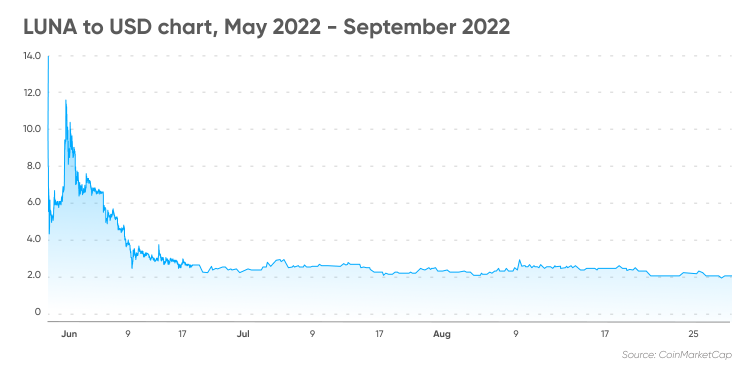 What is your sentiment on LINA/USD?

How many LUNA coins are there?

The total number of old LUNA (now LUNC) tokens used to play a vital role within the Terra ecosystem, especially in relation to the TerraUSD stablecoin before its collapse, as the sale of LUNC coins helped UST keep its parity with the US dollar.

Before the TerraUSD crash, the circulating supply of LUNC was capped at one billion. If the supply surpassed one billion, the extra tokens were burned so that “[LUNC] can have steady demand as a token with pro-rata rights to Terra mining over the long term”.

Following Terra’s re-branding, the maximum LUNA coin supply ceased to exist, so how many LUNA coins are there now?

Upon the re-launch of the cryptocurrency at the end of May, Terra’s new LUNA coin supply was marked at one billion tokens. The coins were airdropped across LUNC stakers and holders, residual UST holders and essential app developers of Terra Classic.

“As you can see, the proposal allocates a large portion of the token distribution to provide a runway for existing Terra dApp developers and to align the interest of developers with the long-term success of the ecosystem,” Terra said on Twitter on 25 May.

7/ As you can see, the proposal allocates a large portion of the token distribution to provide runway for existing Terra dApp developers and to align the interest of developers with the long-term success of the ecosystem.

So, how many LUNA are in circulation at the moment? The LUNA current supply, as of 2 September 2022, surpassed one billion tokens, while LUNA circulation was at about 127 million tokens. Since the launch of LUNA 2.0, LUNA tokens are no longer burned as the cryptocurrency does not have a maximum supply. Because the LUNA circulating supply does not have a hard cap, the token is considered to be inflationary.

Who are the biggest whales?

News and speculation surrounding the biggest LUNA whales seem to resurface every so often.

The company noted that the wallets holding the assets of TerraForm Labs (TFL), Luna Foundation Guard (LFG) and the distribution module where the Community Pool lives were removed from the airdrop so that Terra would become “a fully community-owned chain”.

On 3 May, crypto whales tracking website WhaleStats announced that the old LUNC token was in the top 10 most purchased tokens among 500 of the biggest ethereum (ETH) whales in 24 hours. According to WhaleStats, investors had purchased an average of 110 of the old LUNC tokens on 3 May 2022.

There has been  speculation that Terra’s co-founder was one of the biggest holders of the new LUNA token, however, there is no evidence to support the claim.

Data provided by Luna Rich List showed that, as of 2 September, the top LUNC whale was TerraForm Labs, which owned over 432 million coins.

The platform listed the second biggest LUNC holder as an anonymous investor who holds over 67 million tokens, followed by the Binance Exchange with over 29 million tokens, and two more anonymous wallets holding over 25 million and 23 million tokens. The top five LUNC whales owned over 576 million tokens, which amounted to around 0.008% of the total supply.

Remember, tokenomics and ownership details shouldn’t be used as a substitute for your own research. Cryptocurrencies are high-risks assets. You should always conduct your own due diligence before investing, looking at an asset’s technical and fundamental analysis, latest news and analysts’ commentary.

Past performance does not guarantee future results. And never trade more money that you can afford to lose.

By LEA SKENE - Associated Press BALTIMORE (AP) — Since the Baltimore Police Department started overhauling its practices through a...

The long-awaited series from Teen Wolf creator Jeff Davis, Wolf Pack aims to fill that supernatural void in the hearts...

2022 was an extremely good and bad year for television. While there were many amazing shows, such as the final...

The 10 Most Nail-Biting New Amsterdam Episodes

For five seasons, New Amsterdam brought us some of the most intense storylines that we'll never forget. From hospital power outages to...

Once Sheena joins your party in Tales of Symphonia, you can have her utilize her exclusive ability to call upon...

Cardano (ADA) DeFi Ecosystem Has One Major Advantage Over Its Competitors: Community