Not XRP, SHIB but this alt can be your choice for diversifying portfolio


Litecoin [LTC], which is often regarded as an underdog, displayed a commendable performance last week as compared to other market players.

Interestingly, Litecoin was featured in the ‘Top 5 Altcoin’ list published by the Evening Standard, which definitely adds more value to the blockchain.

The list mentioned some of the cryptocurrencies in 2022 that can be viewed as alternatives to the king of crypto, Bitcoin [BTC]. These altcoins can be considered for investment purposes or can be a choice for diversifying investment portfolios.

Apart from Litecoin, other cryptos that made it to the list include Ethereum [ETH], Cardano [ADA], Solana [SOL], Bitcoin Cash [BCH], and Dogecoin [DOGE], which was the only meme coin on the list.

While most cryptos struggled to move upwards since late August, Litecoin managed to register positive 24-hour and seven-day gains. At the time of writing, LTC was trading at $57.24 with a market capitalization of $4,068,169,109.

The performance increment did not come as a surprise, as several on-chain metrics backed the uptick. For instance, LTC’s Market Value Realized Value (MVRV) ratio quickly gained an uptrend along with its price.

The price surge was also backed by high volumes, further establishing the legitimacy of the episode.

Interestingly, the number of receiving addresses increased over the last week. It was a positive sign for LTC as it indicated investors’ confidence in the token. 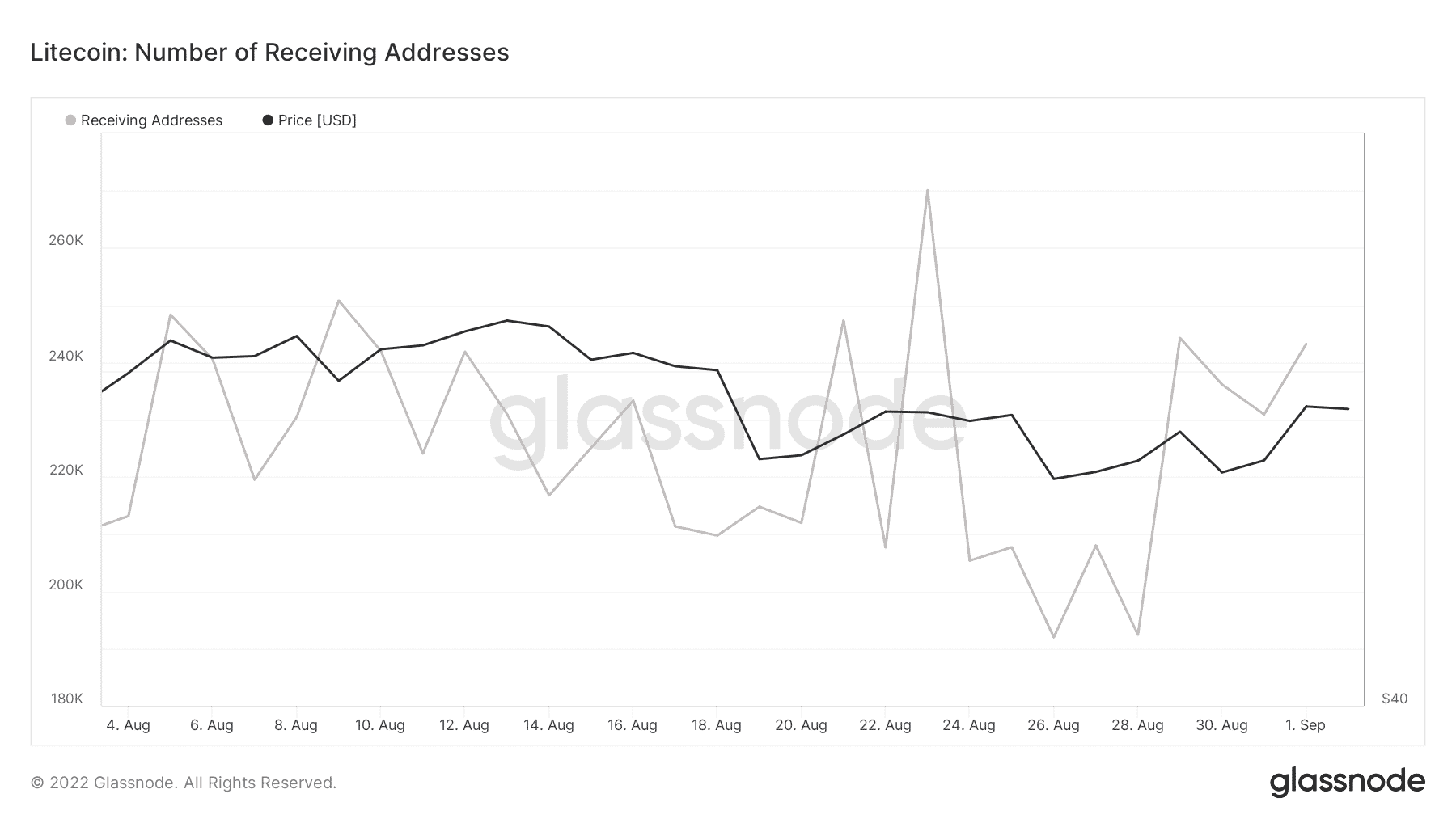 Furthermore, LTC’s social presence also increased over the last week as its trending words rank improved considerably. This pointed toward an increased community interest in the coin.

Gains in critical on-chain metrics along with development activity suggested better days ahead for Litecoin.

Litecoin’s four-hour chart also looked promising as a bullish pattern was formed, further strengthening the chances of a surge in the coming days.

LTC showed resistance at the $57.8 mark, but a breakout may be on the charts due to positive on-chain metrics and a bullish ascending triangle pattern.

The 20-day EMA (Green) flipped the 50-day EMA (red), which is a bullish signal. Moreover, the Relative Strength Index (RSI) also registered an uptick, increasing the possibility of a northward breakout.

However, the Chaikin Money Flow (CMF) showed a bearish divergence as it went down. The price and RSI registered upticks, which might restrict LTC from going up further.

In the past week, Bitcoin has seen a 10% rise in its value, leading many to believe that a bull...

As the crypto market continues to advance, crypto investors are readying up to enter the new month. February 2023 is...

How Orbeon Protocol (ORBN), ImmutableX (IMX) and Avalanche (AVAX) Can Boost Your Returns

As the cryptocurrency market continues to evolve, investors are always on the lookout for the next big opportunity. It’s time...

A widely followed crypto analyst says that Bitcoin (BTC) could continue its uptrend as he keeps a close eye on...

Crypto winter: A lot of regulatory good can still emerge