Both crypto and sports basically never sleep. If one sport is out of season, there’s bound to be another in-season. When the stock market is closed, there’s always a crypto chart that’s moving. We’re back with another weekly review of sports and crypto activity, with this week’s “Sports Slice.”

Lionel Messi dominated the sports headlines this past week. So it’s only right that crypto got in the mix. Let’s dig in to that story and more.

Undoubtedly the dominant headline in sports news this week was Lionel Messi’s departure from his longtime club, FC Barcelona. Messi had spent nearly two decades with the club, and seemingly expressed a strong willingness to return, however the two parties couldn’t come to an agreement. Barcelona cited La Liga regulations as major hurdles that restricted the deal from getting done.

The star footballer announced this week his move to sign with Paris Saint-Germain (PSG) as part of a two-year guaranteed deal, with a third-year option. Messi was second on Forbes’ list of highest-paid athletes on the planet.

Part of Messi’s compensation package (beyond a hefty salary, of course) included a “large number” of $PSG fan tokens. The tokens came to market early last year as PSG partnered with Socios.com and Chiliz.

We all know Messi has golden feet – but does he also have diamond hands?

It seems like every week, Chiliz and partner Socios.com are adding new major league teams across the globe to their rosters. In last week’s ‘Slice’, another Premier League soccer club, Leeds United, teamed up with Chiliz for a new fan token. Everton FC was fresh off joining Chiliz as well.

This week, the NBA’s Sacramento Kings are teaming up with a marketing partnership with Socios.com. No need for Socios.com to stop there – moments later, they partnered with the Orlando Magic as well. The Magic’s long-time legend Hedo Turkoglu will be a featured spokesperson throughout marketing messaging for the partners.

Another busy week for Chiliz and Socios.com with more additions to their domestic sports roster.

This Premier League Club Has Some DOGE Up Their Sleeve…

Watford FC is locking in a sponsorship deal with Stake.com that will result in the Watford club kit carrying Dogecoin imagery on the kit’s sleeves. The partnership will bring home just shy of $1M for Watford, according to reports. Watford has been a bit all over the board in the Premier League, but is showing strong performance lately, sitting at 7th in Premier League standings.

Check out the full story from our team at Bitcoinist around this partnership here.

Mark Cuban, owner of the NBA’s Dallas Mavericks and outspoken crypto advocate and investor, was vocal this week about his optimism of Dogecoin’s future viability. Cuban’s doubling down now, and incentivizing Mavericks fans to pay in DOGE. In a tweet this week, Cuban shared that a summer merchandise sale was coming to Mavs.com where fans who paid in DOGE would receive special pricing.

The Grand Prix Series is a major pillar of the World Chess Championship circuit and will run from February through April next year. As part of an announcement this past week, the World Chess body shared that Germany’s capital of Berlin will be host to the series next year, and Algorand will serve as the series’ Official Blockchain Partner. 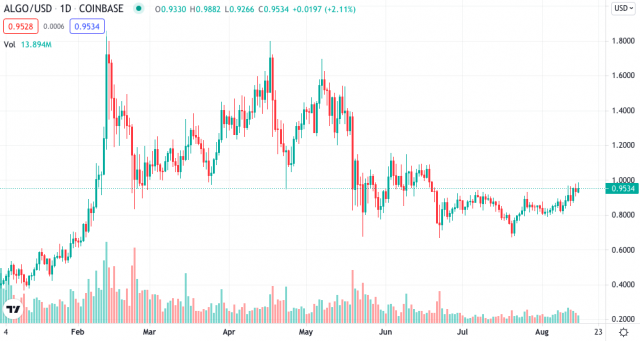 A New Type Of Sports NFT: Polygon Studios And Rario

We briefly highlighted this story in yesterday’s NFT recap, ‘NFTs In A Nutshell.‘ Polygon Studios, the blockchain’s latest investment into NFTs and gaming, is teaming up with Rario. The marketplace is anticipated to launch in September, and will be host to cricket NFTs. Polygon is based in India, and cricket is far and away the most popular sport in India – so this is a very logical first step for Polygon to enter sports-related NFTs.

Italian soccer behemoth AC Milan and their affiliate esports club, AQM, are partnering with crypto exchange BitMEX. The deal will be Milan’s first-ever sleeve sponsor, and BitMEX’s first-ever sponsorships in both soccer and esports. The partnership establishes the exchange as the club’s official cryptocurrency trading partner.