A series of new all-time highs from altcoins and a drop in the Bitcoin dominance metric has many analysts convinced that an alt season has started.

Bitcoin’s (BTC) 65% recovery from sub-$29,500 on July 20 to a swing high of $48,200 on Aug. 14 took less than a month and helped bring fresh bullish momentum back to the crypto market and to traders who were dreading the prospect of another prolonged bear market.

Currently, the BTC rally has stalled out near the $46,000 price level, and this phase of sideways trading is giving altcoins an opportunity to step forward. As shown in the chart below, the total market capitalization of the altcoin market has risen 80% since July 20. Meanwhile, the Bitcoin dominance rate is down 10% since July 30.

Data from TradingView shows that the dominance rate of Bitcoin had been on the rise in recent weeks, but this trend fizzled out for Bitcoin on July 30 as a number of altcoin projects rallied due to a marketwide oversold bounce, new partnerships and protocol updates.

Projects with a focus on nonfungible tokens (NFTs) and decentralized finance (DeFi) were the leading altcoin gainers over the past four weeks.

Three of the biggest gainers over the past month include Axie Infinity Shards (AXS), Solana (SOL) and Terra (LUNA), which all saw their prices break out to new record highs on Aug. 17. 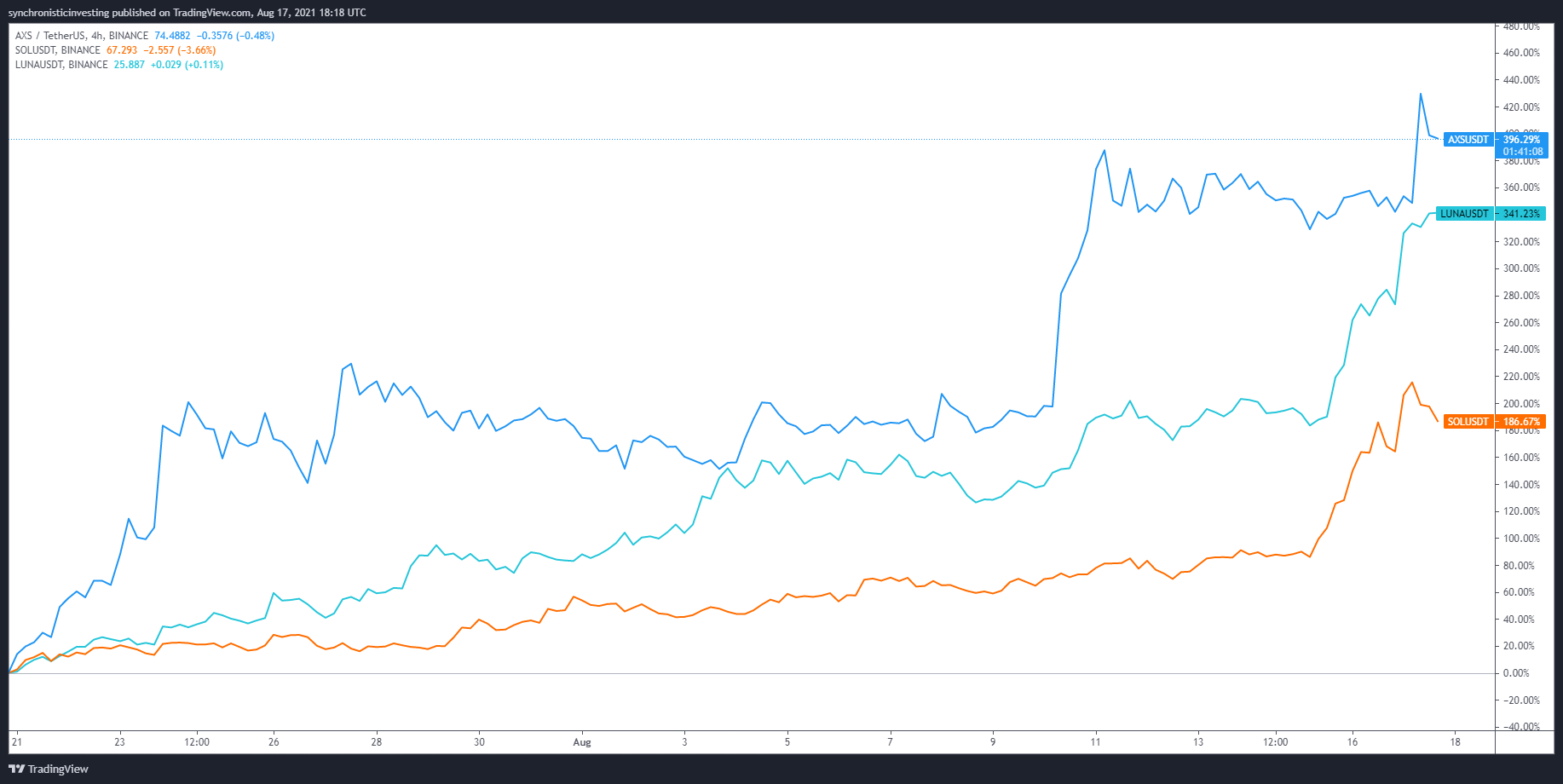 One interesting observation to note is that Solana and Terra began to see increased interest several days after the implementation of the London hard fork on the Ethereum network.

While the London hard fork introduced several beneficial changes to the Ethereum network, including a token burning mechanism that has the potential to make Ether deflationary, the upgrade did little to solve the problem of high transaction costs. This left the door open for competing layer-one solutions like Solana and Terra to gain market share.

The surge in altcoins has led many traders to forecast the dawn of a new altcoin season. According to “The Moon,” a pseudonymous Twitter analyst, altcoin seasons follow a major run-up in the price of BTC, especially when the price stalls or pulls back.

The altcoin season is happening right now exactly as I predicted!!! pic.twitter.com/Od0wef67ga

Further evidence pointing toward the start of an alt season is found in the increasing number of altcoins notching new all-time highs over the past two weeks. Double-digit daily gains and price breakouts from projects like Audius and memecoins like Dogecoin (DOGE) and Shiba Inu (SHIB) are making headlines, and Crypto Twitter is abuzz with chitter-chatter about the hottest altcoins to watch.

Despite these strong performances, it’s interesting to note that the Altcoin Season Index is actually at its lowest point in two years, as highlighted in the tweet below.

The last 30 days were Altcoin friendly, but the Altcoin Season Index (90 days) is the lowest in 2 years.
What comes next?https://t.co/EbbDVymYJ5 pic.twitter.com/MjaTjU6zXM

What this means, in the long run, is up for interpretation, but one bullish take is that the altcoin rally seen in the past two weeks is just a prelude to the real altcoin season, which has yet to begin.

To date, Bitcoin continues to be the leading market indicator that dictates the future direction of the crypto market as a whole, but data shows that consolidation phases often give altcoins an opportunity to push higher.

If Bitcoin’s price drops back toward $40,000 or below, then most analysts would expect altcoin prices to also move south. On the other hand, a rally above the $48,000 level is likely to see altcoin prices push higher.

The characteristically volatile nature of the cryptocurrency market is back in full force on Dec. 2 after the optimism of the past couple of...
Read more

Layer-two (L2) solutions for the Ethereum network have become a popular topic of discussion and speculation on their associated tokens backed the massive rally...
Read more

Australian university researchers have questioned Bitcoin’s reputation as the best store of value network in cryptocurrency, with Ethereum on track “to becoming the world’s...
Read more

RICHLAND, Wash., Dec. 2, 2021 /CNW/ -- At a time when most countries still maintain a tough legal regime prohibiting the use and supply...
Read more