Axie Infinity price is coiling up after setting up a new all-time high on August 11. The consolidation could lead to a 20% move that pushes it into a price discovery phase or lead to a retracement to stable support barriers.

Axie Infinity gained popularity during the deep consolidation phase of Bitcoin and almost all altcoins. Due to the sudden spike in its userbase, AXS price also saw exponential growth. Interestingly, this ascent does not seem to be short-lived as it keeps setting up new all-time highs.

This growth can be seen in the cumulative protocol revenue for Axie Infinity, which stands at $334 million, almost 2.2 times more than the second largest altcoin, Ethereum.

While this chart paints a picture of the activity going on in the Axie Infinity metaverse, the Esports grant announced by Mavis Capital on July 15 is coming along, according to their program lead, Andrew Campbell.

I know we’ve been a little quiet about this esports grant; however, things are progressing nicely!

We have a draft of a calendar just about ready for release. The esports server is online and finishing the last round of testing.

The Esports grant set aside 5,000 AXS tokens currently worth $340,830, threefold higher since the announcement almost a month ago.

While the Esports event will give it massive exposure and probably help onboard new users, Axie Infinity is plagued with scammers using phishing techniques to steal accounts and clear out players’ wallets.

On this topic, Campbell adds,

we are constantly taking down fake scams, apps, and impersonators but it’s an arms race… always working on improving our processes here and utilizing new tools to issue takedowns.

AXS price coils up for a big move

Axie Infinity price has been coiling up since setting up an all-time high at $77.50 on August 11. If the buyers make a comeback, AXS will try to take a jab at $77.50. A decisive 4-hour candlestick close above $77.50 will confirm a bullish breakout.

In such a case, Axie Infinity price might make a run at the 161.8% Fibonacci extension level at $84.70, creating a new all-time high. From the current position, this move would constitute a 25% upswing. 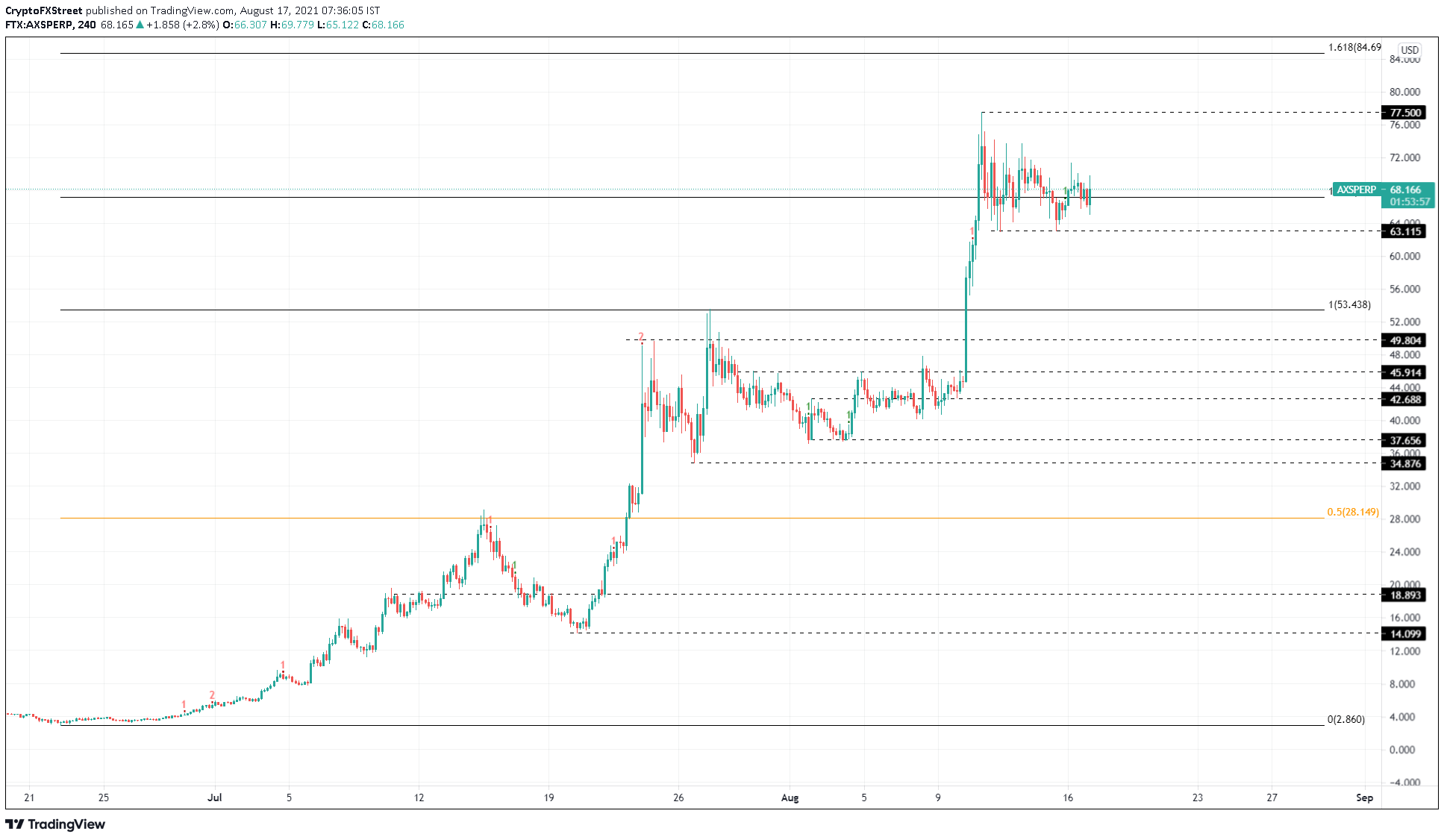 On the other hand, if the buyers fail to propel AXS higher, investors can expect a retest of the $63.12 support barrier. A breach of this level will confirm a bearish breakout and could lead to a 15% downswing that tags the previous all-time high at $53.44, a 20% downswing.

In some cases, AXS might also retest the $49.80 demand barrier.