Return of the crypto bulls

Bitcoin’s 54% rally to $46 000 in the last three weeks has ignited talk of a bitcoin supply squeeze.

Analysis by blockchain research group Glassnode shows 12.48 million of the 18.7 million bitcoin in circulation are in long-term holder (LTH) hands.

“This is extremely similar to the volume of coins held by LTHs in October 2020 before the primary bullish impulse started,” says Glassnode.

Long-term holders now account for 82.68% of total bitcoin supply, after removing the nearly 20% of coins that have been lost or are otherwise unrecoverable.

The ratio of short-term holders is currently at 25%.

A drop to 20% would put bitcoin firmly into a supply squeeze situation, which has historically been bullish for the coin.

The data from Glassnode also suggest that new buyers of bitcoin (BTC) have stuck around to become longer-term holders.

A bullish feature of the market is that coins aged between three and 24 months account for nearly half the total bitcoin supply, and that a higher percentage of coin holders appear to be in it for the long haul.

This view is confirmed by a July report from Kraken Intelligence, indicating a bullish shift in sentiment. July was the second month in a row that bitcoin’s price growth (+18%) outperformed altcoins (+7%). Bitcoin’s drop to a low of $29 288 in July triggered a rally that led to a short squeeze, resulting in $2 billion in crypto short liquidations, nearly half of which occurred on July 25 when BTC broke the $40 000 resistance level.

Whales (large holders of BTC) and miners opted to accumulate BTC in July. This reduced the available supply of BTC, signalling a favourable outlook for the coin, says Kraken.

Ethereum (ETH) is up 78% from its July low of $1 776, powered by the general shift in crypto sentiment and technical upgrades to the Ethereum blockchain which is expected to result in up to $40 billion of ETH coins being staked (put to work on the blockchain in return for rewards).

Read: Ethereum’s London upgrade could boost its price through burns

Technical analyst Damanick Dantes, writing at CoinDesk, says BTC’s long-term uptrend remains intact despite the sharp 50% correction from an all-time high of about $63 000 in April. The coin found support at the $30 000 level, but will likely face resistance near $50 000 to $55 000, which could stall the recovery given short-term overbought signals.

Bitcoin is currently holding above the 40-week moving average, which reflects renewed upside momentum, says Dantes. “Bitcoin will need to form a decisive break above $55 000 to fully resolve the selling pressure from May.” 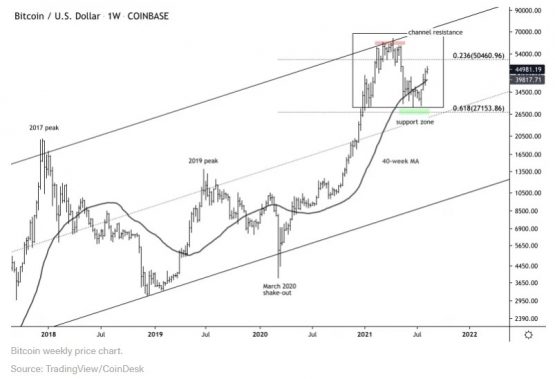 The three-month slump in BTC from its April all-time high above $63 000 has been variously blamed on Tesla CEO Elon Musk’s on-off love affair with the digital currency, as well as China’s clampdown on crypto activity, particularly mining. Blockchain data from Kaiko show trading activity might have wound down in China, but the slack has been picked up in the US and Europe.