Bitcoin price has witnessed a massive upswing over the past month and shows that this run-up was not a fluke as it is hovering steadily above a crucial support level. Ethereum, Ripple and other altcoins have also experienced exponential growth in their market value and show signs of continuing this uptrend.

Bitcoin price rallied through the supply zone ranging from $43,150 to $45,321, flipped into a support barrier and is steadily holding above it. This move indicates that the uptrend was not a fluke.

Going forward, market participants can expect BTC to consolidate here or climb higher to tag the immediate resistance level at $49,024 and $50,958.

Investors need to understand that retesting the $50,000 psychological level after a flash crash and months of consolidation would be a significant morale boost in the cryptocurrency space, which might trigger FOMO and further extend the rally to higher levels such as $55,210 and $56,670.

While the upswing narrative seems reasonable, it might arrive after a brief pullback to $41,330 or $40,550.

The bullish outlook might take a u-turn if the support level at $40,550 is breached. This move would open BTC to crash up to $37,241, where it could form a double bottom and give the rally another try. A breakdown of the said barrier, however, would invalidate the optimistic narrative.

Ethereum price surge between July 20 to date was relatively larger than Bitcoin’s, but it is currently facing a blockade, preventing it from heading higher.

The supply zone, extending from $3,240 to $3,533, needs to be cleared for the bulls to have a shot at the rally. Perhaps, a massive spike in buying pressure similar to the one seen around July 20 would be able to shatter this resistance area and propel ETH higher.

If such a move were to occur, Ethereum price would likely target $3,716, followed by the $4,000 psychological level, a roughly 27% upswing from the current position. 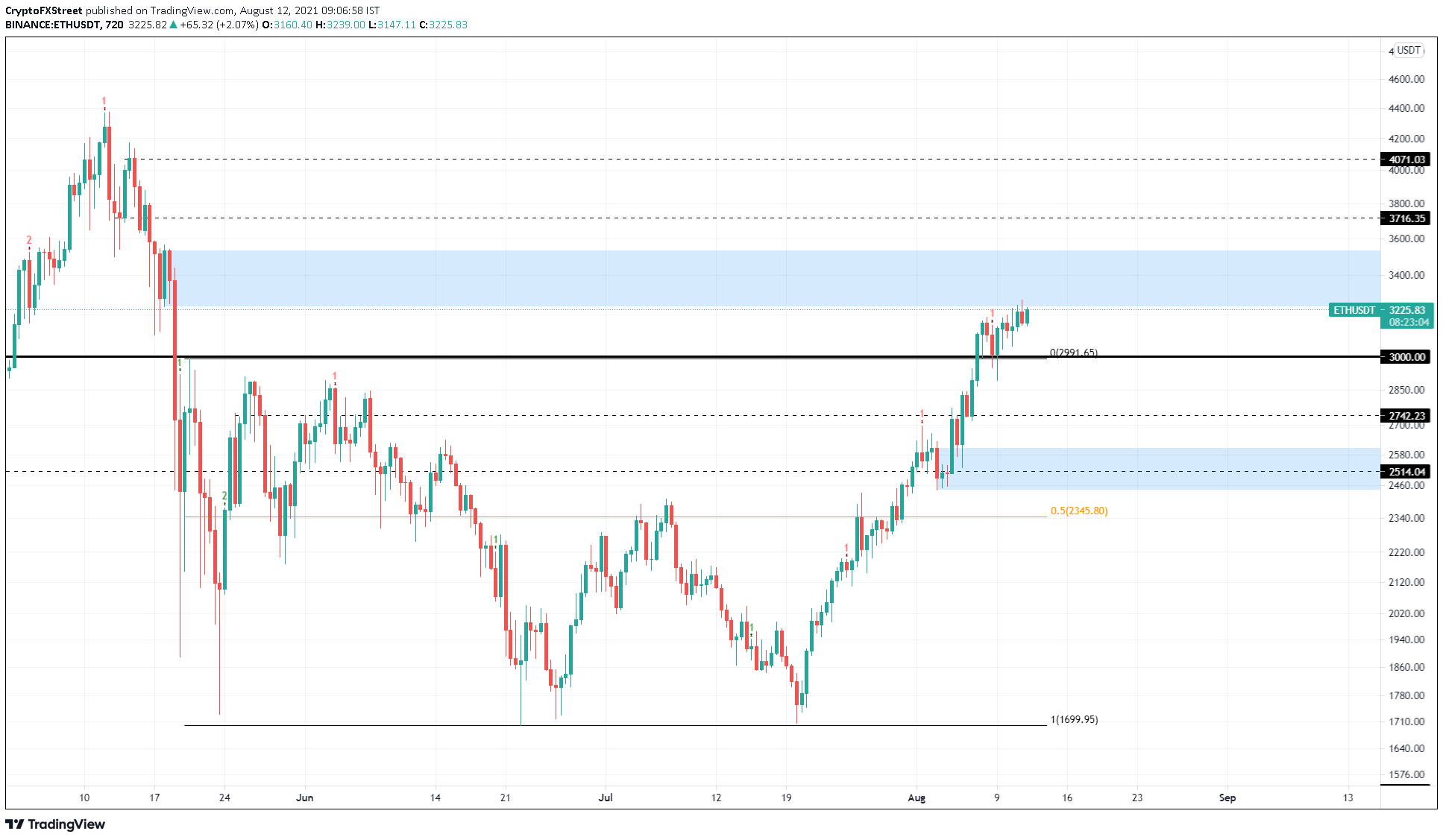 Regardless of the optimism, things might go awry if ETH fails to breach through the supply zone, stretching from $3,240 to $3,533. A potential spike in selling pressure that pushes ETH below $3,000 would potentially hurt the morale among investors, leading to a sell-off and delaying the upswing.

If the resulting crash breaches through the trading range’s midpoint at $2,345, it will invalidate the bullish thesis.

Ripple price ponders its next move

Ripple price sliced through the $1 psychological level and is currently fighting to stay above it as the big crypto and major altcoins contemplate a pullback. Since XRP price swept above the June 1 swing high at $1.100, a failure to sustain above it will lead to a retracement to the immediate support levels, $0.910, $0.832, and $0.760.

While it is unlikely that a correction will extend beyond $0.832, if it does, Ripple will likely set up a double bottom around $0.760 and restart the upswing.

The resulting rally will target $1 and try to convert it into a support level. If successful, it will be a major development and open the path for retesting the resistance levels at $1.050, $1.170 and $1.323. 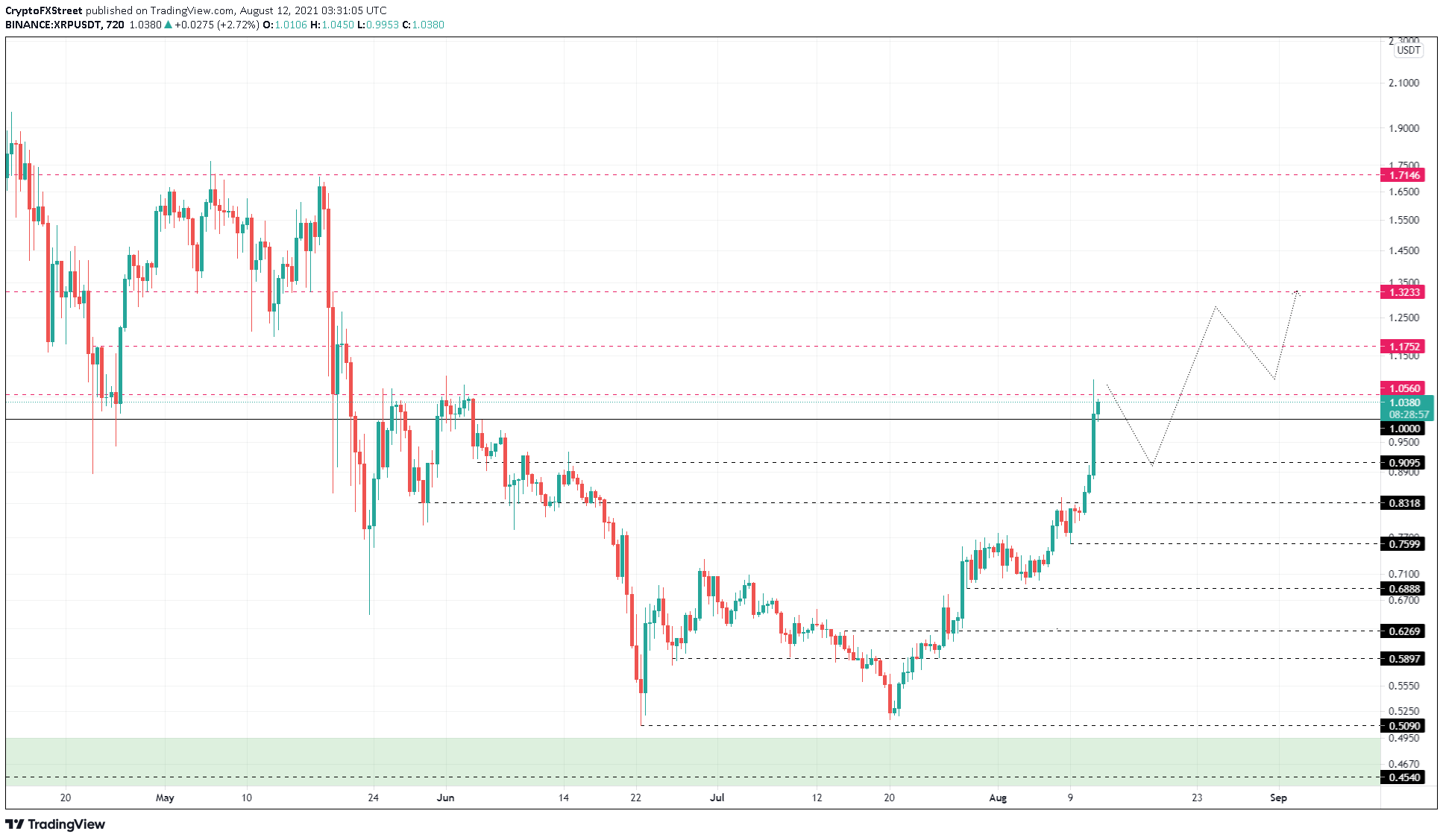 While the overall structure of the cryptocurrency market is bullish, things might head south if the $0.832 level is breached since it is a strong support barrier. Although an uptrend might emerge from $0.760, its breakdown will invalidate the bullish thesis as it would create a lower low.