Powell says private cryptos may not be necessary, while BTC nears a volatility surge

Bitcoin price has returned just over 9% since the May 19 crash low of $30,000, while Ethereum price is flat versus the May 19 low and XRP price is nearing a bearish Death Cross pattern on the daily charts.

Today, Federal Reserve Chair Jerome Powell, in his presentation to the House Committee on Finance, responded to questions related to cryptocurrencies by stating that the Federal Reserve aims to publish a report on digital currencies in early September. He acknowledged that “risks to a central bank digital currency are real and that an appropriate regulatory framework is urgently needed for stablecoins.”

However, Powell was firm in his view that the US Dollar is not at risk of losing its status as the reserve currency for the world and opined that there might be no need for private cryptocurrencies if the Federal Research launch a fully digital dollar. Commonly referred to as a central bank digital currency (CBDC).

No doubt, the cryptocurrency market will be eagerly awaiting the September report on digital currencies. For now, the Federal Reserve seems content to recognize cryptocurrencies but diminish the threat they pose to the position of the US Dollar in the global monetary structure.

Bitcoin price may be readying for better outcomes this summer

The July 8 breakdown from a rising wedge pattern tilts the probabilities in favor of a volatility spike to the downside. The pattern projects a measured move of 27% and a Bitcoin price low of $25,000. A drop to the measured price target would confirm the original breakdown from a larger head-and-shoulders pattern, first triggered on June 22 and dispose of the 61.8% Fibonacci retracement level of the 2020-2021 rally at $27,175.

Price contraction always leads to price expansion or volatility. Bitcoin price is nearing a moment of increased volatility as the pioneer cryptocurrency wrestles with the converging technical obstacles that are compressing price action. For sure, BTC will disrupt the early doldrums of summer for at least a short period.

Here, FXStreet’s analysts evaluate where BTC could be heading next as it seems bound for a rebound before capitulation.

To review, Ethereum price dropped below the lower trend line of a rising wedge pattern at $2,330 on July 8 before establishing some support along the 200-day SMA that meshed with the instructive February high of $2,041 and underpinned by the 2020 ascending trend line at $1,965.

Despite the riches of support, Ethereum price fell below the support levels yesterday and logged a daily close below the 2020 ascending trend line for the first time. It shifts the ETH risk to the downside and turning the once credible support of the February high and 200-day SMA into a role of resistance.

The potential downside includes the 61.8% Fibonacci retracement of the 2020-2021 advance at $1,730, the June 22 low of $1,700 and the 2018 high of $1,419. However, ETH investors need to be alert to the potential of an emerging bear trap, where Ethereum price temporarily slides below the ascending trend line, creates some fear before catapulting the smart contracts giant notably higher in a sling-shot formation.

ETH upside potential includes the 50-day SMA at $2,311 and then the upper trend line of a larger descending triangle being formed at $2,540, presenting a 27% rally from the current Ethereum price. 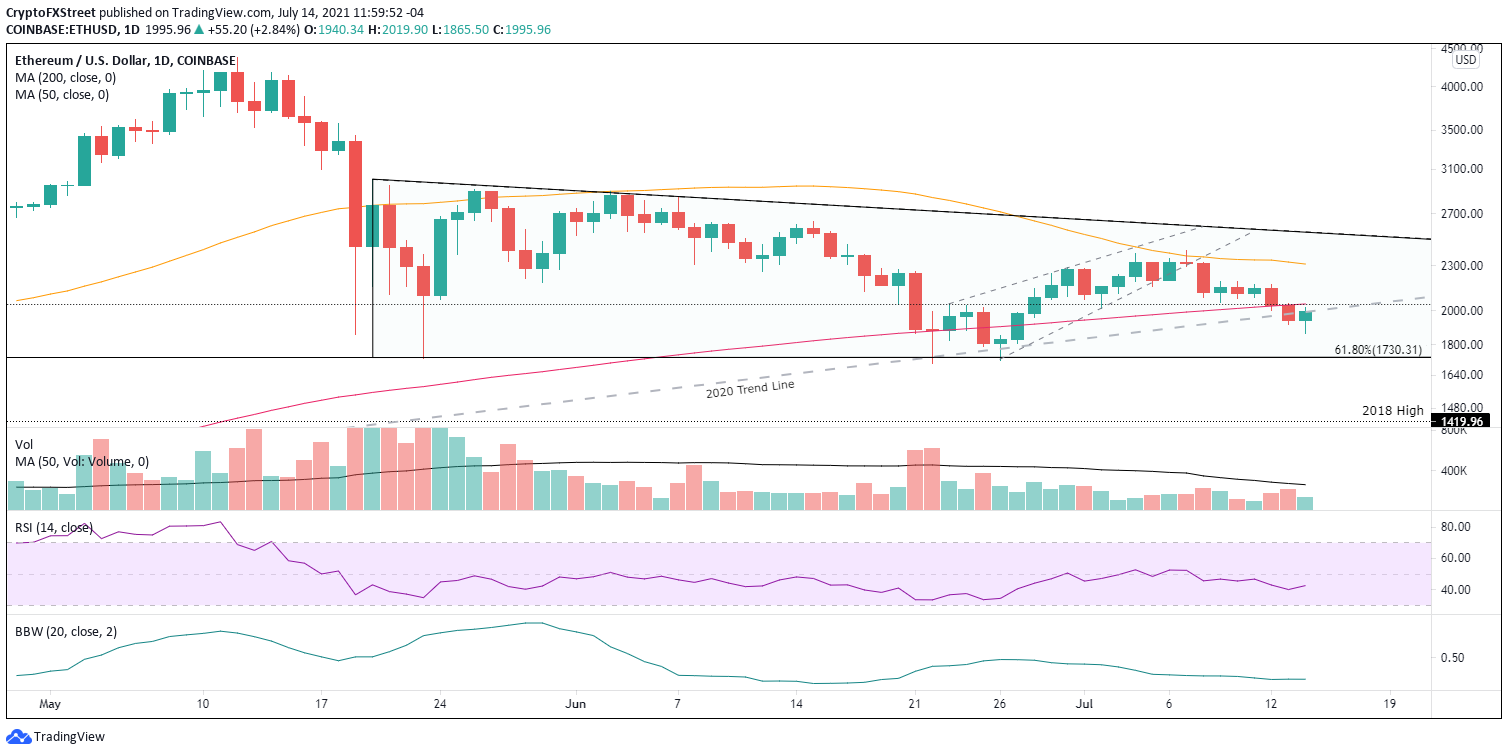 Ethereum price is at an inflection point for the two-month corrective process. The dominant trend is at risk and fortified by a downward bias in the broader cryptocurrency complex. Nevertheless, the potential for a bear trap is a real scenario for ETH and should influence any investment decision-making.

Here, FXStreet’s analysts evaluate where ETH could be heading next as it seems bound for an upswing.

The XRP price decline below $0.650 and resulting failures to rebound may be interpreted as Ripple extending the range of the listless consolidation that may include a test of the 78.6% Fibonacci retracement of the 2021 rally at $0.555.

A direct effect of the listless Ripple consolidation under the strategically important 200-day SMA at $0.744 and the neckline of a much larger inverse head-and-shoulders pattern at $0.770 is a contraction in the 14-day Average True Range (ATR) back to April levels that preceded the leap to $1.96. Hence, XRP price has experienced a level of price contraction that may signal a surge in volatility. 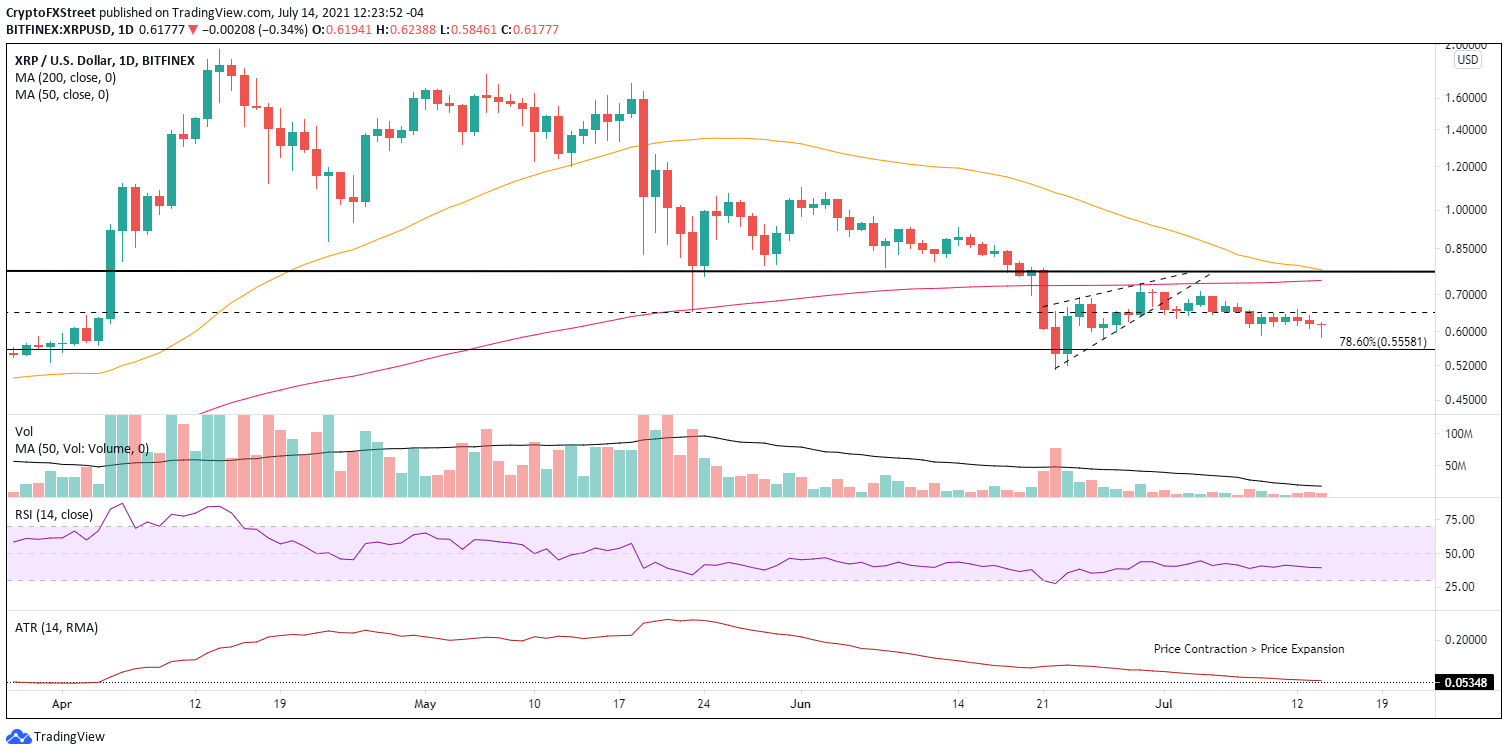 Of course, the price contraction could extend for more weeks, but at the very least, it should prompt Ripple investors to acknowledge that risk moving forward. However, until renewed volatility, XRP price will be locked between $0.770 and $0.555, creating short-term trading opportunities.

Moreover, it should be highlighted that Ripple is nearing a bearish Death Cross pattern on the daily charts as the 50-day SMA inches closer to crossing below the 200-day SMA, thereby exerting more downward pressure on XRP price.

Here, FXStreet’s analysts evaluate where Ripple could be heading next as it seems bound for an upswing.