The cryptocurrency market continues to expand as the Decentralized Financing (DeFi) world keeps evolving out of the traditional fiat currency system. Many new digital coins have popped up and many more will in the near future. The Tixl token is one of them, coming about in 2020 by the German company Elbstack GmbH which consists of an experienced team currently building a high-performance network for a new era of Decentralized Finance (DeFi), payments & banking. The lifespan of the coin has been short and the overall value remains below $1, although it is trying to get established and with the recent developments, as well as with the upcoming ones, the use of the Tixl token will increase.

The network where Tixl (TXL) runs in the interoperable layer 1 Autobahn network which can support instant transactions with minimal fees, while transactions carried out through Tixl are free for digital assets or tokens or any transfer of data and in general. Tixl traded between $0.03 and $0.05 for several months before it joined the crypto rally in February, increasing to $0.75 by the end of March. Although it came down eventually and trades around $0.13 as of June 1 20221, according to most crypto brokers.

Recent Changes in the Tixl Price

Tixl is still fresh but it is subject to the sentiment in the cryptocurrency market nonetheless, hence the climb in February and March when the sentiment was positive and the retreat when the sentiment turned negative, although this token didn’t crash like the rest of the market. The evolution of the network will make the token more usable by participants and increase the value in time. In Q1 of 2021 the Tixl SDK was implemented which serves third party DeFi applications. The first chain integrated is BTC but ERC20 will also be integrated in the second half of 2021. More is to come, with interoperable smart contracts & dApps and possibly cross-chain liquidity pools.

Tixl Price Prediction for the Next 5 Years

Tixl has a market cap of $9.5 million, with a circulating supply of 54,075,497 TXL coins and a maximum supply of 899,994,670 coins. The fully diluted market cap is $156,945,989 with the price where it is at the moment. As we mentioned above, Tixl has quite a few plans with the cross-chain liquidity pools being a major goal to reach, but which would increase the demand for Tixl considerably. The price has been sliding lower since the end of March and at the moment is bearish, but it won’t last too long.

The number of cryptocurrencies, coins and tokens in circulation has increased tremendously in the recent years, as it seems like every developer, website or online business is issuing their own coin. Tixl was introduced in September 2020, as the Tixl Token TXL where Tixl’s Autobahn Network is based as a business model. Not many exchanges list Tixl, since it is relatively new and not yet very popular, especially the major exchanges. Although there are a few that accept trading Tixl such as Uniswap (V2), PancakeSwap, ProBit Exchange and Bilaxy.

TXL is used for payments, which the company claims are almost instant and the fees for transferring Tixl within the network are zero. It can be broadly used for covering transaction fees of other coins, trading fees, as a utility in the data platform Tixl Finance and in any other third party product. Tixl is a low energy consumption token, since it is not mined directly from the public, but it is rather rewarded to people who get involved in Tixl activities, such as liking and sharing their content. Tixl takes pride in its security and privacy, using quantum secure encryption to protect the account balance and the amount of the transactions, keeping them hidden as well for authorized service providers.

The Tixl token was issued to be used on the native network, the Autobahn network. Tixl runs on the consensus algorithm of this network which is based on the Stellar Consensus Protocol. With cryptocurrencies becoming increasingly popular, the main networks such as Ethereum and Bitcoin are becoming congested, as many transactions go through these blockchain networks. This means that transactions become more expensive, slow and not interoperable. The Autobahn network, which is built as a special Directed Acyclical Graph (DAG), aims at taking care of this problem.

The Autobahn is a single high-performance network for all tokens with interoperable Smart Contracts & dApps, with which the company aims at bringing a new era of DeFi, payments & banking. The network has instant transactions and minimal fees for any data transfer data, not just digital currencies. The Autobahn is connected to Bitcoin, Ethereum, Binance Smart Chain or, Polkadot. It only accepts Bitcoin at the moment apart from Tixl, but Ethereum is in the final stages and DASH coin will also be coming on board soon. It basically works in the following steps:

Although, the problem is that different blockchain networks have different liquidity, Bitcoin or Ethereum have much higher liquidity which is difficult to use on BSC. Although with the chain agnostic architecture of Tixl, users can deploy some Decentralized Exchange (DEX) dApp, similar to Uniswap, into Tixl’s Smart Contract validator network and let it use the liquidity cross-chain e.g. from Ethereum, Binance Smart Chain, and the Autobahn Network. Tixl’s Smart Contract solution can be used for any type of application. When the smart contracts become available developers can build DEX with cross-chain liquidity pools. Tixl doesn’t have such cross-chain liquidity pools on the Autobahn Network, but it plans to bring them on soon. Users could swap all cryptocurrencies in a decentralized way with really low fees.

Tixl Technical Analysis – Is the Decline Coming to An End Soon for Tixl?

The Tixl chart doesn’t show too much history, since it is a new cryptocurrency and it is usually quoted against TetherUSD (USDT). It started life at around $0.19 according to most Tixl/crypto charts in September last year, but came down immediately and traded in a range during the second half of 2020. There was a sign towards the end of last year that this year was going to be bullish after the fact that the 20 SMA (gray) turned into support immediately on the weekly chart. In 2021 the bullish momentum of the crypto market pulled Tixl higher as well and we saw a surge to $0.66 by the first week of February. We saw a retreat later that month, but in March the bullish momentum resumed again in the crypto market and Tixl climbed higher once again.

The chart above shows the top slightly higher since the liquidity is low in Tixl and the brokers where it’s listed, but the real high came at $0.7560 at the end of March, before the reversal. The reversal here came before the rest of the market, although that was expected since this cryptocurrency is not well established yet like the major ones. The 20 SMA provided support for a second time in the first week of May and the price bounced off that moving average, but the crash in the crypto market in the second half of May pulled down Tixl this time, although it remains above the previous lows. 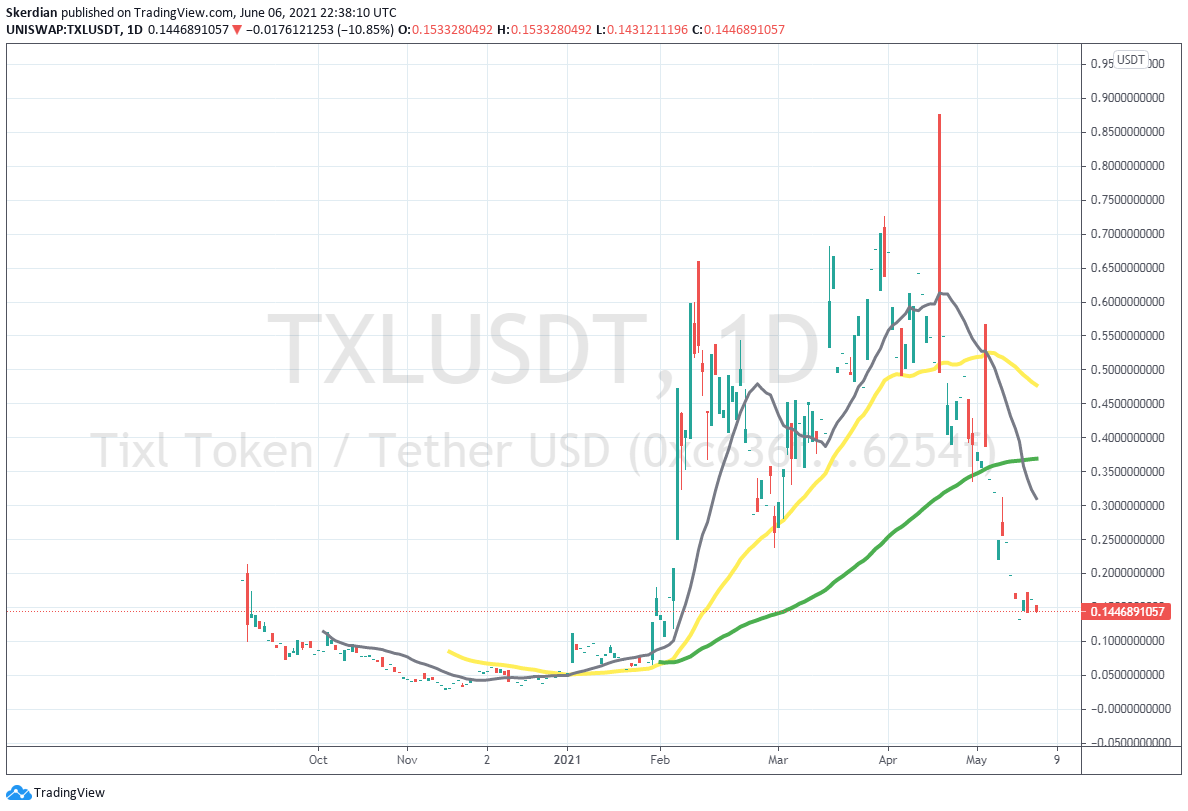 On the daily chart, there are many gaps between the daily candlesticks, since the liquidity is low for Tixl. Moving averages were providing support for it when the price was declining until the end of December 2020, when the price moved above them and the Mas turned into support, particularly the 50 SMA (yellow). The price bounced off that moving average in the beginning of May but it was eventually broken as the crash came in May. The 100 SMA (green) held as support for a while, but it couldn’t resist the crash and it was broken as well, with the price trading around $0.14 as of early June.

In what will likely go down as one of Wall Street’s biggest tantrums of the year, the single-day 40% implosion in shares of DocuSign...
Read more

Why Is Cardano On The Rise Today...